Towards a new aesthetics of parametrically designed pavilions 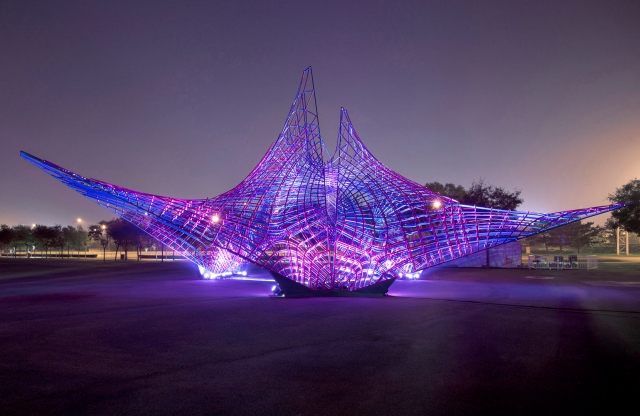 ‘When I am working on a problem, I never think about beauty but when I have finished, if the solution is not beautiful, I know it is wrong.’ (R. Buckminster Fuller)

In order to understand the proliferation of parametrically designed pavilions in the last two decades, one must comprehend the paradigm shift in contemporary architecture and in information rich environments, which is occurring not only in the design and making processes of designers’ end but also in the users end mode of interactions and potential opportunities for multiple communications. The transition from Computer Aided Design to Algorithm Aided Design has raised questions on new modes of collaboration, new advanced fabrication processes, approach to sustainability, questions of design authorship and most importantly presented the challenge of a new aesthetic.

The Pavilion as a typology, suggests interaction, communality and participation, and as such it inevitably offers a high degree of experimentation and innovation. It fluctuates between a building and an experiment, between the speculative and the pragmatic ₂…

The shift to parametric design, as a rule-based system which can be stimulated and controlled by various parameters, proposes a higher degree of complexity. The design parameters could vary from structural efficiency, environmental suitability, potential for recyclability etc. Furthermore, inherent to the parametric design process is the variability, meaning the designer is able to produce multiple possible variations to the same design, which is essentially in the core of experimentation…

The shift to an information-rich society, where most if not all, social interactions are materialised in a virtual network, has been adopted and embraced by self-organised communities of designers, who operate as an open-source platform. These communities of the algorithm-based designers have developed an open discourse of sharing scripts, exchanging ideas, publishing tutorials and in fact by doing so, introduced a worldwide accelerating debate on current professional issues. This mode of operation on the designer-end has simultaneously expanded to architectural schools, which naturally began to rethink their pedagogical approach. Universities around the world, amongst them the Architectural Association in London and The ICD/ITKE of the University of Stuttgart, developed methodologies of Design Research, exploring a case study of design and construction of a ParaPavilion. For instance, see below ‘Interactive Panorama Pavilion 2013-14 by ICD/ITKE, which was conceived as a collaborative effort between students, architects, biologists, engineers and palaeontologists.

…these academic pavilions are placed in an urban space … establishing a new order within the surrounding built environment. These objects in the urban realm act as a 1:1 scale prototype, allowing designers to test their ideas on an actual human scale and receive the user’s feedback instantaneously. Like the virtual world, the pavilion offers constant accessibility, a continuous discourse with its users, who are invited to capitalise the space, inhabit it or pass through. The users, who are typically the city explorers (the flâneur), occupy the space randomly and by their diverse arbitrary movements, reorder the space, as a self-organising system, and create unpredictable spatial configuration as well as multiple social interactions.

The fundamental aesthetics of the pavilion typology is of ephemerality and high degree of permeability; therefore the articulation and the tectonics of the envelope are defining features of the space’s experiential effects, as well as of the object’s uniqueness.

Perforations, as an integral component of the enclosure, are essential for light penetration, but even more so, for communication amongst users, which allow a continuous flow between internal and external spaces. In the ParaPavilion, penetrations have transformed to component-based fields and to digital patterns, which can be parametrically controlled, differentiated and customised. Diverse optimisation methods, which can resolve surface panelisation and tiling stacking, distanced designers from the orthogonal grids and shifted the interest towards three-dimensional grids, aperiodic tiling and patterns, which are offering new visual and aesthetic qualities of non-identical complexity.

To name a few pavilions … The Arum installation by Zaha Hadid Architects for the Venice Biennale 2012, is a flower-like pleated metal geometry, presenting the idea of marrying the analogue paper folding and digital methods –Fig 4. Likewise, the pavilion, ‘Candela Revisited’, which was designed by Zaha Hadid Architects for the China international Architectural Biennial 2013 is a three hyperbolic paraboloids opening up in all directions to provide access and a visual focal point with their tips meeting high in the air, creating a full ephemeral affect –Figs 1 & 2.

As Heinrich Wölfflin, says in his ‘Prolegomena to a Psychology of Architecture’ – ‘To interpret spatial form aesthetically we have to respond vicariously through our senses, share in it with our bodily organisation….’ ₆ Being a culture of virtual worlds, where knowledge and information exchange is in its core, there is great importance to constantly providing the city with ever-changing physical spaces, pavilions, pop-ups and installations, which engage directly with all human’s senses and allow the user to make a meaningful aesthetic judgment of the built form. ₇

This platform for new experimentation, resulting in new aesthetics of the ParaPavilions, is clearly only possible due to generative parametric tools and new interaction modes, while deepening the synergies between architectural articulation, engineering logic and fabrication constraints. The discourse, which incorporates the collective open resources of the designers’ community, the specific designer, the engineer, the fabricator and the user, is enhanced by proliferation of built ParaPavilions but, beyond all considered parameters, it is crucial to allow the space for intuition and for the human creative act, which will always precede the digital act.

[2] Frank Barkow & Regine Leibinger, ‘Between the Speculative and the Pragmatic’, in ‘The Pavilion, Pleasure and Polemics in Architecture’, Edited by Peter Cachola Schmal, Hatje Cantz Verlag, Ostfildern, DAM, Frankfurt am Main, 2009. p171

[6] Heinrich Wölfflin, ‘Prolegomena to a Psychology of Architecture: 1. Psychological Basis ‘, in Empathy, form and space: Problems in German Aesthetics, 1873-93, Getty center for the history of Art & Humanities, Santa Monica, CA, 1994

* Anat Stern is an architect and a researcher, currently working as a Lead designer at Zaha Hadid Architects, being involved in international projects at all scales across Spain, Russia, China, Abu-Dhabi, and the UK.

She graduated from Betzalel Academy in Jerusalem with Honours List and achieved her MA degree at the Architectural Association, in the DRL – Design Research Laboratory programme in 2003.  Her MA thesis work on Responsive environments was published and exhibited across Europe.