I am currently fascinated by the work of Bart Hess and the possibility that his creations could offer a perspective on the design of our future built environment. A few weeks ago I re-visited his work when preparing a teaching proposal for an architecture school. We were researching portable architecture and in that context I thought of Hess’s designs as examples of what we called minimum buildable environments for the human body.

Hess’ creations are inspired by and born out of a physical relationship between body and material. In this sense, there is a highly tactile dimension to the work which implies not only a way of sensing or relating to the surrounding material-environment, but also establishes a kind of interactive relationship between body and environment: the body moves, pushes, weighs/ the material stretches, reveals, contains. Furthermore, by becoming a second skin to the body, the performativity of the material-environments developed and explored by Hess seem to have the potential to not only deal with movements of the body, but also with more subtle processes of the human organism such as breading or sweating.

There is as well a cultural functionality to the works of Bart Hess. Imagined as clothing, rather than reproducing the traditional constructs associated to fashion –aesthetic related, gender related, etc.- these skins communicate physical or psychological conditions of the body. For example, the work Echo presents us with a body that inhabits multiple places simultaneously, while Palais de Tokyo introduces us to a body in disguise, with cellular systemic formations – the very nature of the human body- extending beyond the limits of the skin. By presenting us with these dimensions of the body, Hess’ works set a potential whole new language of interpersonal and social communication. 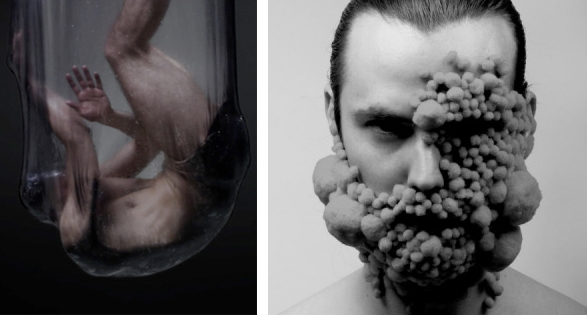 Somewhere between architecture and fashion, Hess’ creations bring me to a conversation I had with a friend not long ago. He reminded me about the story of times in where humans had a thick skin, and the times in which they lost it and started to ruminate on the idea of architecture. I can’t help by thinking of Hess’ works as a search for the skin we have lost.